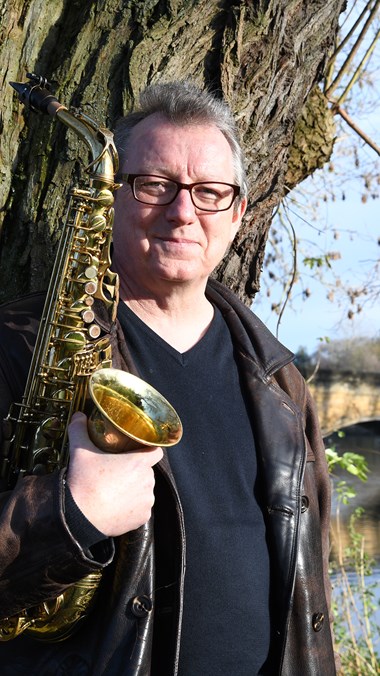 Gerard McChrystal was born in Derry, N. Ireland. He was the first student to graduate from the RNCM with three awards in 1986.   He did postgrad at The Guildhall School, London. During his year in London he reached the final of the RTE Young Musician of the year for the second time, won The Lombard & Ulster £15,000 Foundation on RTE’s ‘The Late,Late Show with Gay Byrne’ as well as The Royal Overseas League, London, The Countess of Music Award, The Sir James Caird Travelling Awarded, Scotland, The Martin Music Award, The NFMS Award and appeared on the BBC’s ‘Opportunity Knocks’ with Bob Monkhouse.   Gerard won a scholarship to study at Northwestern University, Chicago with Fred Hemke. He was awarded his masters degree in 1988.

His UK debut was with The Philharmonia premiering Dave Heath’s ‘Out of the Cool’ in 1989 at St John Smith’s Square. Also in 1989 he performed as soloist in the premiere of Shaun Davey’s ‘Relief of Derry Symphony’ with The Ulster Orchestra. This performance was also recorded for his first CD.

Gerard has performed in over 35 countries including China, USA, New Zealand, Korea, South Africa and Azerbaijan. His main ambition is to develop collaborations and encourage composers, especially from Ireland, to write for the saxophone. Collaborations include composer Philip Glass, The Soweto String Quartet, Rambert Dance Co., London Musici, The Smith Quartet, Classical guitarist Craig Ogden,  vocal groups Anuna and Codetta, Saxophone quartets Saxtet and The Bros Quartet. As part of Bros Saxophone Quartet he has recorded and performed music by Salvatore Sciarrino in Milan. ‘Pagine’ by Sciarrino was released on Stradivarius Records in 2016.

Gerard’s was an ambassador for Derry-Londonderry UK City of Culture 2013 and performed in the opening and closing concerts with artists including Snow Patrol, The Undertones, Liam O’ Flynn, Dana and James Nesbitt.

Gerard has made 15 cds with orchestras including BBC NOW, Ulster Orchestra and London Musici. His saxophone series are published in London and Melbourne. Gerard is Professor of Saxophone at Trinity Laban Conservatoire, London and also teaches at RWCMD, Cardiff. He is a Vandoren Artist. Plans for 2020 include a tour to South East Asia, tour of Portugal and a performance in The Royal Naval Chapel, London with Claude Delangle, Professor of saxophone at The Paris Conservatoire. In April his latest cd will be released with organist Christian Wilson. The CD was recorded in The Royal Chapel, Tower of London and features music from Haydn, Handel, Vivaldi to Jehan Alain and Barbara Thompson.